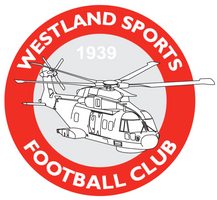 Welcome to Westland Sports FC, a Charter Standard Club based in Yeovil, Somerset

Sunday 19th January...............with the first team game at Blandford off, the reserves took centre stage yesterday but unfortunately they fluffed their lines with a 6-1 defeat at Mere. Although Mere went 2-0 up, a JACK DICKER goal meant Westlands were still in the game af half time. Unfortunately they conceded the crucial 3rd goal immediately after the restart and it was all downhiil for Sports from then on.

Saturday 18th January...............today's first team match at BLANDFORD has been called off due to a frozen pitch and the possibility that when it thaws it will be waterlogged.

The reserves match at Mere is definitely ON.

Thursday 16th January.................we have three games scheduled for this weekend but there must be some doubt about all three being played. However, we'll be optimistic and crack on with the preview regardless. Unfortunately both our saturday teams are away this weekend so no match for the Alvington faithful to enjoy (or should I say, endure !). However it's not too far to BLANDFORD to see the first team in action in the DPL. It's a nice venue at Blandford and we enjoyed going there last season, winning 2-1 in the league and then winning the league cup semi-final 5-1. Add to that a 4-2 home win in the league and it was a clean sweep for Westlands. However, times change, and both teams have changed significantly since last season so perhaps these results should be ignored. This season's form sees Sports in 4th place in the league with 31 points while Blandford are in 8th place trailing by 7 points but they do have a game in hand so not much in it. Sports have strugged recently with only one win in the last three games so they will need to show significant improvement if we are to get anything from this match.

As previously stated the reserves are also away this saturday at MERE TOWN which will be a tough task for them. Mere currently sit down in 5th place in the table, 10 points behind the leaders but they have 4 games in hand so are right up there in the race for the title. Westlands are 4 points ahead in 3rd place but again Mere have 4 games in hard. Mere have only lost once this season and with Sports coming off the back of a terrible result at Chickerell last week its hard to be optimistic about their chances on saturday. However we did win 1-0 there last season so maybe history will repeat itself !

The only match at Alvington this weekend is the U18s League Cup 2nd round tie against NAILSEA UTD on sunday. On paper there looks to be nothing between these two sides as Westlands went to Nailsea in september and won 3-1 but Nailsea returned the compliment, coming to Alvington in December and beating us 4-2. In the league table there is nothing between us either with Sports in 2nd place with 25 points and Nailsea in 3rd with 24 points. Last season we played them in the 1st round of the cup and won 2-0 so with home advantage I am hopeful we can get through a tricky tie. As usual all these matches kick-off at 2 pm.